After thanking the crowd, Soto tearfully spoke of all the patients she had seen in her chair over the years, and how their stories of struggle propelled her forward.

“Be the voice for the people who can’t tell their stories,” she said. “That’s always been my mission.”

Soto’s mission has been clear since she began working in Southwest Michigan after she and her husband, Carlos Fernandez, moved from San Juan, Puerto Rico, in 1997.

The two met when a friendly favor led Fernandez right to Soto’s door after he gave her brother a lift home after his car broke down. They were interested in each other immediately, Fernandez said.

At the time, Soto was studying for her board exams at the University of Puerto Rico. She completed her residency in pediatric dentistry. Later, she would attain a master’s degree in public health and a postgraduate certificate in public administration from Michigan State University.

Despite all of these degrees, community service is what defines his wife, Fernandez said.

“After I don’t know how many degrees, public health is still what motivates her to keep going,” he said. “Just being able to help with the health disparity in this community in the favor of the vulnerable.”

Her reputation for using her knowledge to help the underserved community is what drew Family Health Center CEO Denise Crawford to Soto in 2015.

After a county assessment showed there were only three full-time and one part-time dentist servicing all of Kalamazoo’s under- and uninsured patients, Crawford sought out Soto’s help in developing a plan to expand Family Health Center’s oral health services.

Although skeptical of how big the project was, Soto agreed to join Family Health Center as a consultant while continuing her work for Kalamazoo County’s oral health program. But, even as a consultant, Soto wasted no time getting the plan in order.

Within the first day of working together, Crawford said, she received 25 emails from Soto outlining her plan for what would become, at the time of its opening in April 2017, the largest dental clinic in any Federally Qualified Health Center in the state.

After the county’s dental program was taken over by Family Health Center in 2016, Soto became the chief dental officer at the new center located at 505 E. Alcott Street.

In September of that year, Soto pulled Crawford aside before a meeting and told her she had been diagnosed with a rare and aggressive form of cancer in her liver.

Soto followed the news with a simple statement, Crawford said: “We’ve got to get this done for the community.”

“She could have easily said I’ve done my part as a dentist, as a wife, as a mother, but she never accepted that,” Crawford said. “She always talked about her community and her responsibility to the community.”

So, instead of taking time to spend with family and crossing off items on her bucket list, as Crawford suggested at the time, Soto continued her work toward opening the center.

Between her diagnosis and the Alcott campus’ grand opening in March 2017, there were chemotherapy sessions and hair loss. There were drugs newly approved by the FDA and clinical trials. There was even a pump surgical implanted into her liver to attack the cancer right at its source.

“The beauty of it was it became not only her mission, but her medicine,” Crawford said. “It’s what kept her going.”

In the first two years of treatment, Soto and her husband flew to New York 37 times to visit Memorial Sloan Kettering Cancer Center.

And, still, she kept working.

Crawford recalls a conference call where she asked Soto what she was hearing in the background. To which Soto casually replied that the doctors were prepping the room. Soto had taken the call while awaiting radiation treatment, she realized.

“I don’t think we ever knew how bad it was for her because she never let up,” Crawford said.

After the grand opening of the 50,000-square-foot clinic in Kalamazoo’s Edison Neighborhood, Crawford, again, expected Soto to step back and focus on her own health.

But, still, she kept working. 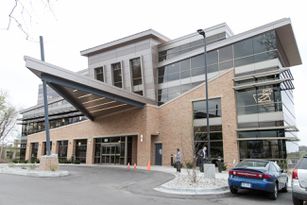 After the new center opened, the 27 dental operatories weren’t filling up the same way medical examination rooms were. Years without accessible oral health care, the center believes, resulted in a generation of Kalamazoo residents who did not understand or value dental care.

In response, Crawford asked Soto if it would be possible to have a day of free care — another grandiose idea that would take time, money and manpower. And, again, Soto jumped at the opportunity to help.

On March 23, 2019, the Alcott center opened its doors for the first Dental Day of Caring. More than 600 free services were performed for more than 300 patients who did not have oral health insurance.

Soto, who initially was just going to be driven around the campus to observe the excitement, ditched her backup wheelchair. She talked through the center, talked with patients and wept.

“It was so heartwarming for all of us to see her actually see it and witness it,” Crawford said. “It was her life’s work come to reality.”

Soto has since passed the torch of chief dental officer to Dr. David Vanslambrouck. Despite a formal goodbye in December, she continued working until March.

Her relentless pursuit of ending the health disparity in the county has left a lasting mark, Vanslambrouck said.

“Her legacy will be her love and compassionate care for the community,” he said. “Regardless of her own circumstances she always had the purpose-drive attitude to increase access to healthcare in our community.”

After the reveal of the newly named Dr. Lisandra Soto Dental Day of Caring Saturday, its namesake stood before the crowd and humbly thanked them.

Then she reminded them all there’s still work to be done.