A man who hadn’t been to the dentist for nearly three decades because he was too scared had to have his jaw removed and can no longer eat, drink or talk properly.

Darren Wilkinson, 51, was found to have a tumour the size of a fist in his jaw when he finally went for a check-up.

He had been terrified to see the dentist for 27 years but plucked up the courage to pay his dentist a visit last year when he kept waking with blood on his pillow.

X-rays showed ‘a black hole in the middle of his face’ and so Mr Wilkinson was sent for more tests at the hospital.

The support worker was eventually diagnosed with ameloblastoma, a rare, benign, tumour of the bone which mostly occurs in the lower jaw – it was not cancerous.

Mr Wilkinson lives with his wife Mel, 53, in Sheffield, who said her husband has been left like a ‘drooling baby’ since his surgery in April.

Darren Wilkinson, 51, who hadn’t been to the dentist for nearly three decades, had to have his jaw removed and can no longer eat, drink or talk properly (pictured in hospital) 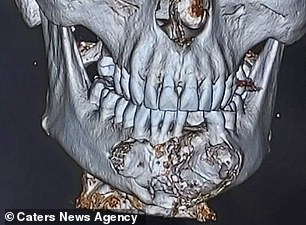 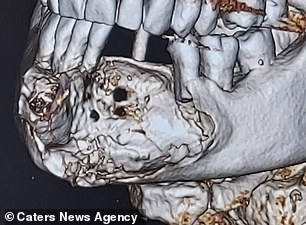 Mr Wilkinson was diagnosed with ameloblastoma, an extremely rare disorder which can lead to a benign tumour. Pictured: Scans showing the affected jaw bone 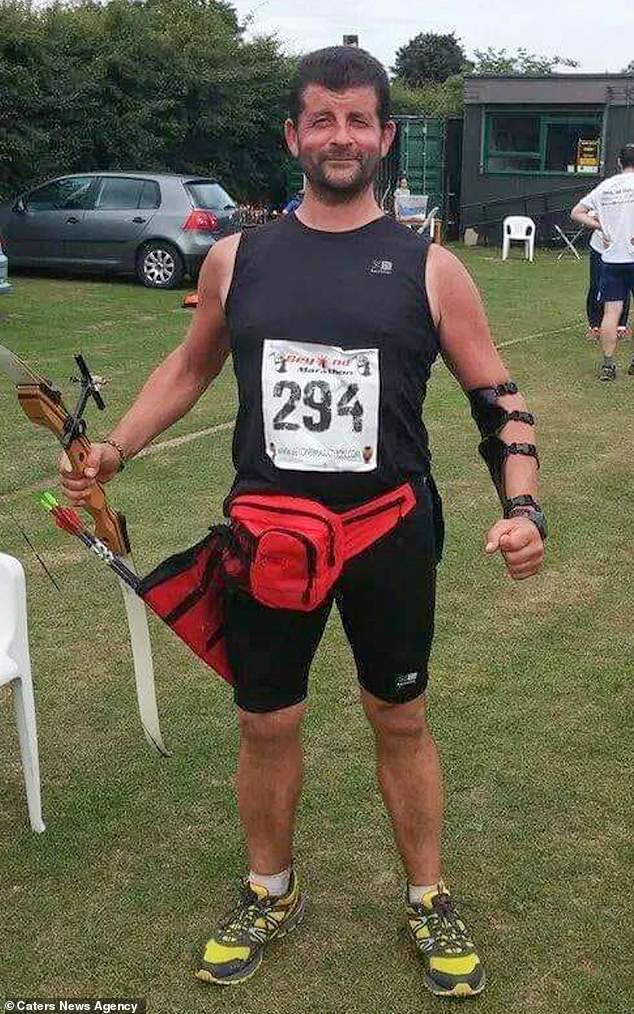 The support worker was diagnosed with an ameloblastoma, an extremely rare and usually benign tumour that affects the jaw bone. He is pictured at a race 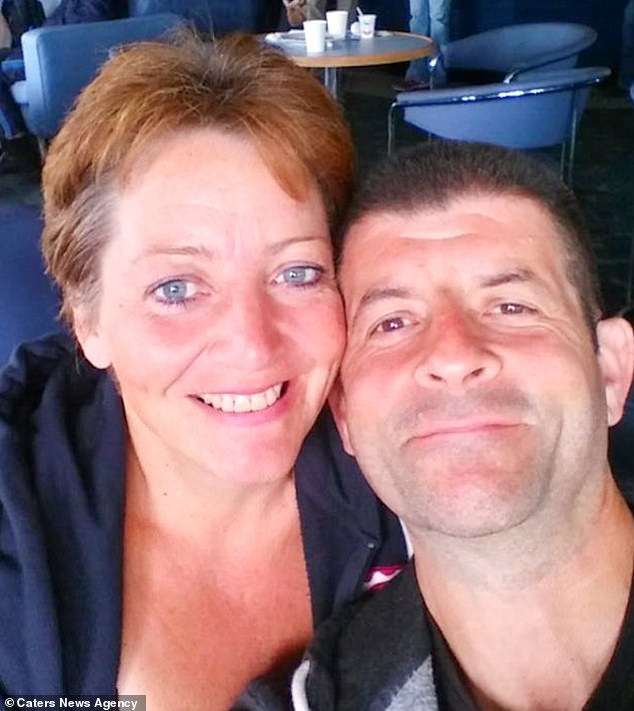 Mr Wilkinson lives with his wife Mel, 53, in Sheffield, who said: ‘We were told the odds of him getting it [an ameloblastoma] is one in five million’

Former teacher Mrs Wilkinson said: ‘I have been trying for years to get him registered at the dentist and eventually was able to book him an appointment.’

‘He was so afraid of going to the dentist that he hadn’t gone for 27 years. He really doesn’t like dentists but as he went along he came back white as a sheet.’

The family did not reveal why Mr Wilkinson avoided the dentist, but it is a common fear which has even earned itself the unofficial name ‘dentophobia’.

‘He had an X-ray showing a massive shadow, a black hole in the middle of his face and the dentist said he had never seen anything like that before,’ Mrs Wilkinson added.

‘He would wake up in the morning with blood on his pillow and have a really bad breath from time to time. I just thought he wasn’t brushing his teeth properly.’

After Mr Wilkinson’s appointment in April last year, he was referred as a non-urgent case to the Charles Clifford Dental Hospital in Sheffield where he had more scans in August.

He had two biopsies — a procedure to take a small sample of tissue for analysis — in December 2019 and January 2020 which confirmed the shadow was a ‘large, locally aggressive tumour’.

Ameloblastoma may be caused by an injury to the mouth or jaw, infections of the teeth or gums, or an unhealthy diet.

However, scientists do not fully understand what causes the tumours.

The number of people affected is also so small it is unclear, but it is thought to account for just one per cent of all jaw tumours, according to the Bone Cancer Research Trust.

Mr Wilkinson had tests spanning several months, but was not diagnosed until late January of this year.

Mrs Wilkinson said: ‘Christmas was hell because we were told it could have been a tumour but we knew from the X-ray it was the size of a fist.

‘He wasn’t allowed to eat anything solid because his jaw was so thin in places it would just fracture.

‘Getting the diagnosis was absolutely horrific. It’s so rare, we were told the odds of him getting it is one in five million. It felt like living with a time bomb.’ 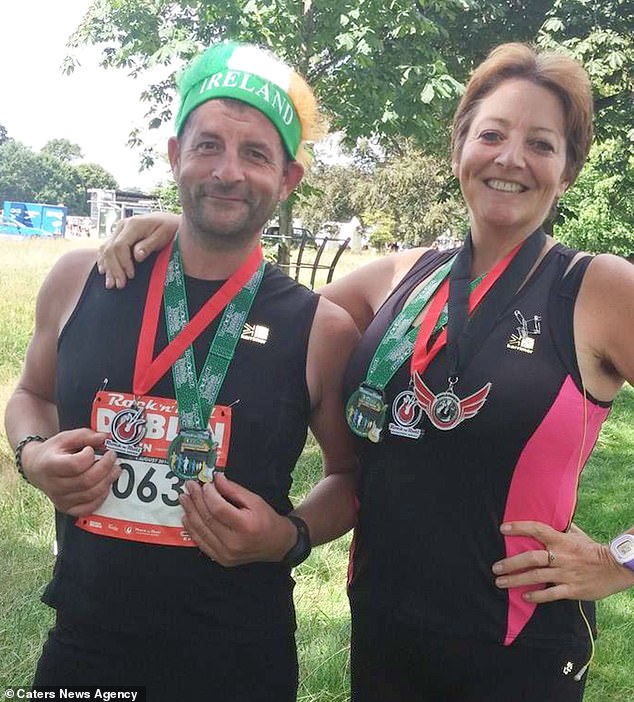 Mrs Wilkinson said husband has been left like a ‘drooling baby’ since his surgery in April. The couple are keen runners (pictured before) 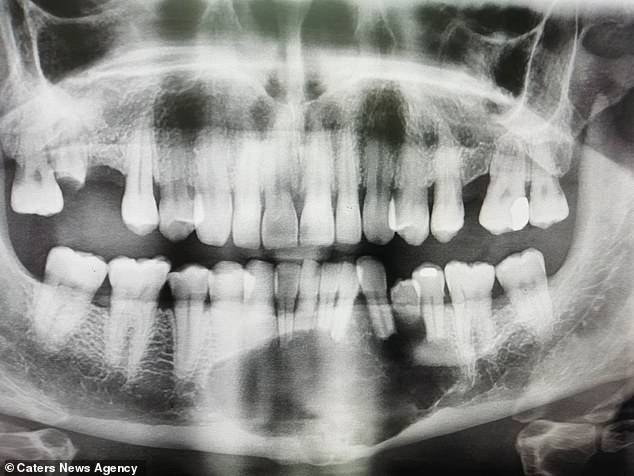 Mr Wilkinson’s X-ray showed a ‘massive shadow, a black hole in the middle of his face’ (pictured bottom). ‘The dentist said he had never seen anything like that before’, his wife said 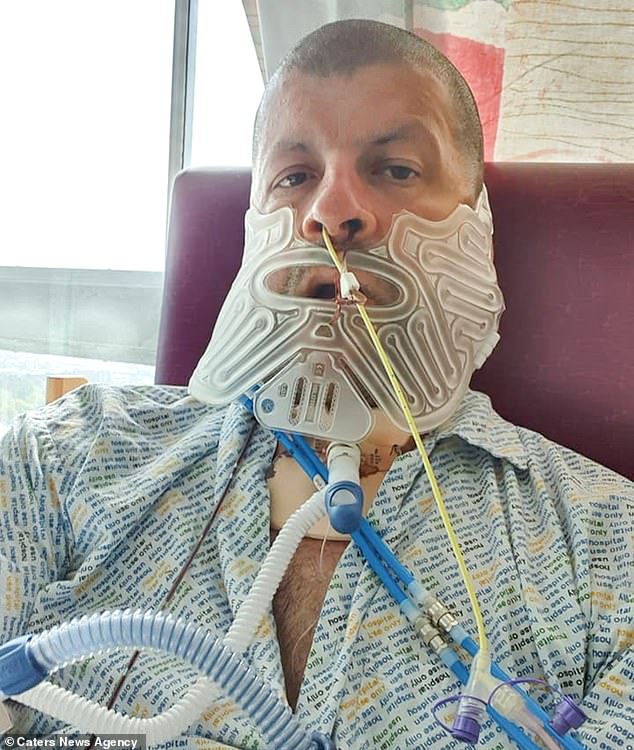 Mr Wilkinson’s operation to remove 90 per cent of the lower jaw, as well as most of his teeth, was scheduled for the March 20. But it was postponed to April due to Covid-19 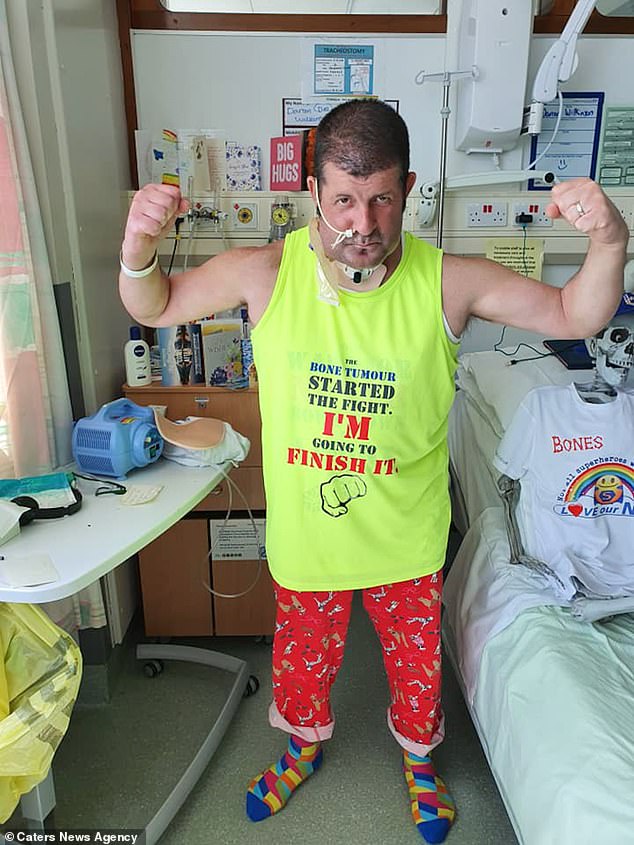 A week after his operation Mr Wilkinson developed sepsis – when the body’s immune system goes into overdrive in response to an infection by attacking healthy tissues – and he needed emergency surgery. He is pictured in recovery at hospital

Ameloblastoma is a rare, benign, disorder causing a tumour of the bone which mostly occur in the lower jaw, but sometimes the upper jaw bone.

It affects people of all ages, ethnicity, and men and women equally, according to the National Organization for Rare Disorders (NORD).

Statistically, only one per cent of all jaw tumours are ameloblastomas, the Bone Cancer Research Trust reports.

It is very common for the tumour to occur around the wisdom tooth.

The cause of ameloblastoma is largely unknown and it is difficult to work out because there are so few patients with this tumour.

Ameloblastoma may be caused by an injury to the mouth or jaw, infections of the teeth or gums, or inflammation of these same areas, NORD says.

Infections by viruses or lack of protein or minerals in a person’s diet are also suspected of causing the growth or development of these tumours.

Although there is currently no identifiable cause for ameloblastoma, there are risk factors thought to increase the likelihood. These include poor oral hygiene.

Although ameloblastomas tend to be slow-growing, non-cancerous, tumours they can occasionally become aggressive and affect tissues surrounding the jaw area, such as the sinuses or eye-sockets as well as nerves and blood vessels.

That’s why it is important to spot it early in order to treat it.

Doctors said Mr Wilkinson’s tumour needed to be removed as soon as possible because ameloblastomas can spread to other parts of the skull, like the eyes or nose, or the lungs. Although it is uncommon, ameloblastomas have been known to become malignant.

Mr Wilkinson’s operation to remove 90 per cent of the lower jaw, as well as most of his teeth, was scheduled for the March 20.

But it was postponed due to the Covid-19 pandemic and took place in April.

Titanium plates were inserted where his jaw used to be in order to keep Mr Wilkinson’s face together.

The metal frame has been attached to what remains of his jaw and it is hoped it will encourage the bones to regrow. Surgeons also plan to use bone grafts from his leg to help rebuild his mouth.

For three months, Mr Wilkinson was fed through a tube inserted into his nose and through to the stomach. It was replaced last week by a PEG feeding tube straight through his abdomen into his stomach.

A week after his operation Mr Wilkinson developed sepsis – when the body’s immune system goes into overdrive in response to an infection by attacking healthy tissues.

Sepsis can occur after an operation and in severe cases can be life-threatening and cause multi-organ failure.

Mrs Wilkinson said: ‘I dropped him off at the hospital and drove away-it was the longest, most desolate day of my life.

‘He was so ill, he said he could “feel every organ in his body shutting down”.

Mr Wilkinson had to be rushed for emergency surgery, and then had six other operations after to treat complications and infections.

Mrs Wilkinson said: ‘Now when I look inside his mouth I can clearly see the exposed metal plates, wires and the dead bone.

‘He can’t eat or drink, talk, his tongue has swollen so much, he can barely breathe.

‘It’s looking extremely likely that he will never be able to return to work.

‘He was very concerned about how he was going to look – now he feels like a big drooling baby. ‘

The plan now for Mr Wilkinson, who is still in recovery, will be getting a transplant from his lower leg bones to try to rebuild his jaw.

During this entire ordeal, Mr Wilkinson has set up online support groups for people having similar diagnoses.

He is raising awareness of little known tumours whilst also raising funds to support the Bone Cancer Research Trust.

Since he won’t be able to return to work anytime soon the couple have set up a Gofundme page.